Skip to content
Collins Electric > About Us > Our history: From humble beginnings

Collins Electric Company was founded in 1906 by John J. Collins, who held a degree in electrical engineering from St. Francis College. The firm's earliest work was converting homes in Springfield from gas light to electricity. During this time, materials were delivered to each jobsite by horse drawn wagon and apprentices of the company were tasked with shoveling out horse stalls! 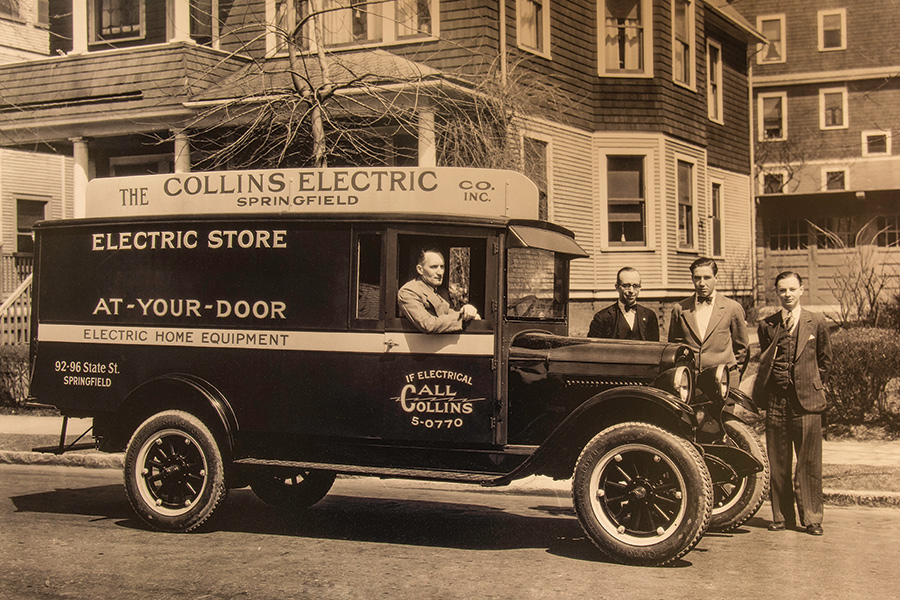 In 1911, John persuaded older brother, Timothy, to join the firm and in 1919, William P. Collins joined and became the general manager.

In 1939, Collins Electric installed the first fluorescent lighting system in the world at the Springfield Armory. In fact, during World War II, the company rewired most of the Armory, which needed to modernize quickly for the war effort.

William P. Collins passed away in 1950, and it was at that time that William A. and Donald, his two sons, came into the company. Through the 1950s and 1960s, the company grew and prospered and began to get involved in increasingly larger and more demanding projects.

The 1980s witnessed the building of Monarch Place and the Sheraton Hotel in Springfield, and numerous projects for General Electric in Pittsfield.

In addition to seeing a boom in educational, medical and computing facilities throughout the 1990s, Collins also saw an uptick in green buildings with tie-ins to cogeneration and solar.

Our experienced team can handle all your electrical needs.
Call us at 413-592-9221 to get started!

Call Now!
‹
We use cookies on our website to give you the most relevant experience by remembering your preferences and repeat visits. By clicking “Accept”, you consent to the use of ALL the cookies.
ACCEPT
Manage consent

This website uses cookies to improve your experience while you navigate through the website. Out of these, the cookies that are categorized as necessary are stored on your browser as they are essential for the working of basic functionalities of the website. We also use third-party cookies that help us analyze and understand how you use this website. These cookies will be stored in your browser only with your consent. You also have the option to opt-out of these cookies. But opting out of some of these cookies may affect your browsing experience.
Necessary Always Enabled
Necessary cookies are absolutely essential for the website to function properly. This category only includes cookies that ensures basic functionalities and security features of the website. These cookies do not store any personal information.
Non-necessary
Any cookies that may not be particularly necessary for the website to function and is used specifically to collect user personal data via analytics, ads, other embedded contents are termed as non-necessary cookies. It is mandatory to procure user consent prior to running these cookies on your website.
SAVE & ACCEPT